With the explosion in independent media and publishing options in recent years, character voices have become highly in-demand. Did you realize that the video game industry now deals in bigger dollars than Hollywood? The creation of those properties, along with those from indie producers aspiring to gain some notoriety in the field, have created a serious intensity worldwide. I’ve had the opportunity to play a part in bringing to life a number of characters in video games over the years…though my contribution is usually so early in the process that I rarely get to see the end result. Unfortunately, I’ve also done a poor job of tracking them. Often due to the way I’m hired, I don’t even know the name of the company or the game…I’m just asked to play a role. So while I’ve participated in dozens of such projects, I don’t have a credits list. 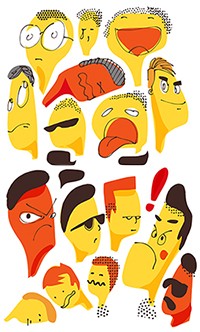 Consider the flexibility and utility of character voices

Also, character voices can play a part in commercials, in spoofs, in various forms of animation (I haven’t done too many cartoon voices…just a few) like vignettes for training videos, and in audio dramas of various kinds. It is fascinating how many places one can conceive of using a character voice when you stop and think about it. How much more fun is placing a phone or online order for pizza if it’s accompanied by a cartoonish Italian chef character voice? If you’re buying Western boots or apparel, you have a certain image in mind. How much more fun or appropriate will it be when your point of contact features a wizened old cowboy character voice? I have found that a number of businesses love my elderly British fantasy guide character voice…including game designers and event creators. And quite a few like my deep-voiced, slightly-Southern character voice delivery as the prototype for the sound they’re looking for for their restaurant or event. Sometimes, they are more serious, and sometimes more crazy fun. But character voices make for very interesting elements in all kinds of presentation formats.

So, I’ve created a nice long demo display a number of voices I can bring to life for any of those purposes. Enjoy the deep dive! 😉

Here’s some of my character voice work as the British police car Agent Powers, in a web series for children where each character is a different car. As you can see from the millions of views, these videos are very popular!

Voice of an animatronic lion from a local McDonald’s. Circa 2004.

In addition to characters of all sorts, another need for many games is the role of narrator or host. It may be in military theme, the thoughts of the story’s protagonist, or a fantasy voice…a la Gandalf. Here are two more demos…the first more general and the second featuring the more British wizard/king delivery: